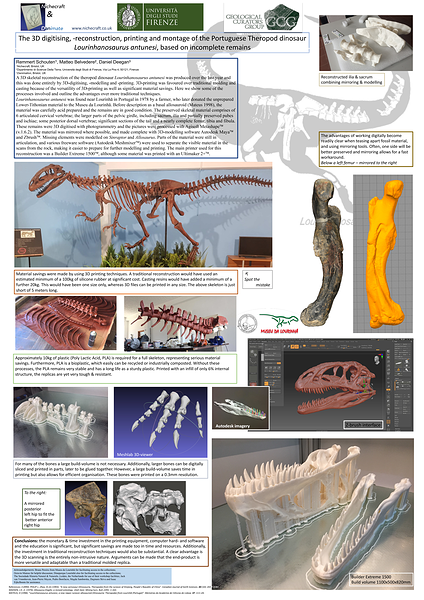 A 3D skeletal reconstruction of the theropod dinosaur Lourinhanosaurus antunesi was produced over the last year and this was done entirely by 3D-digitising, -modelling and -printing. 3D-printing was favoured over traditional molding and casting because of the versatility of 3D-printing as well as significant material savings. Here we show some of the processes involved and outline the advantages over more traditional techniques.

Lourinhanosaurus antunesi was found near Lourinha in Portugal in 1978 by a farmer, who later donated the unprepared Lower-Tithonian material to the Museu da Lourinha. Before description as a basal allosauroid (Mateus 1997), the material was carefully acid prepared and the remains are in good condition. The preserved skeletal material comprises 6 articulated cervical vertebrae; the larger parts of the pelvic girdle, including sacrum, ilia and partially preserved pubes and ischiae; some posterior dorsal vertebrae; significant sections of the tail and a nearly complete femur, tibia and fibula. These remains were 3D digitised with photogrammetry and the pictures were processed with Agisoft MetashapeTM (v.1.6.2). The material was mirrored where possible, and made complete with 3D-modelling software Autodesk MayaTM and ZbrushTM. Missing elements were modelled on Sinraptor and Allosaurus. Parts of the material were still in articulation and various freeware software (Autodesk Meshmixerä) were used to separate the visible material in the scans from the rock, making it easier to prepare for further modelling and printing. The main printer used for this reconstruction was a Builder Extreme 1500TM, although some material was printed with an Ultimaker 2+TA.