GCG are deeply saddened to bring you news that one of our longest serving members and great friends, Stuart Baldwin passed away on 20th September, aged 91. Stuart was well known to many as the extremely helpful, knowledgeable, and cheery bookseller based in Essex, and seen at many festivals and conferences. 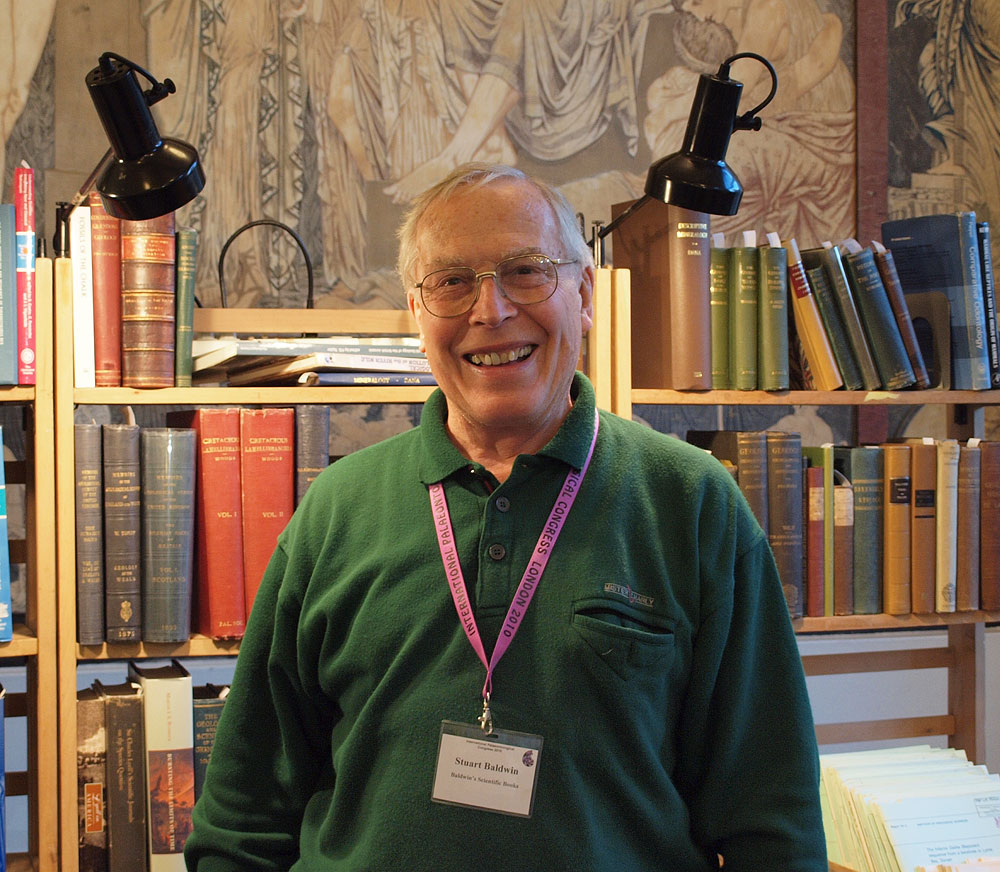 Stuart was born in Essex in 1930 and educated in Witney after being evacuated to Oxfordshire during the war. He had qualified as an electrical engineer as well as a pharmacist, and spent seven years as a medical representative in London. Following this he spent 15 years marketing computers for IBM before being moving into the field of lecturing about small business start-ups. In his spare time he was also a collector of both fossils and books, and in 1959, he set up successful businesses of his own making wonderful educational fossil replicas (official supplier to the Open University) and dealing in second-hand books, as well as running a small museum (with over 100,000 specimens) of Palaeontology and Zoology at Fossil Hall, in Witham, Essex. He wrote several books of his own, including ‘Dinosaur Stamps of the World’ and ‘A Beginners Guide to Second-hand Book-dealing’. He held a Guinness World Record, as the ‘world’s slowest student’ – taking 28 years to complete his science degree with the Open University, as he was kept so busy with his career, his small businesses and his family. He ‘retired’ in 1995, selling his replica fossil manufacturing business and museum to the Open University, but retained his second-hand books which he continued to sell for many years, and a visit to his collection never failed to unearth a few literary gems of interest. He started winding down his book-selling activities still further in 2001 by initially relieving himself of large numbers of reprints, nicely pre-empting the move into mass-digitization of journal back-issues – a wise move on his part. He closed his bookshop at this point, but continued buying and selling from his home. Stuart even took up a new hobby of bee-keeping in his later years in order to keep active. Stuart was always a great supporter of GCG and its work, becoming one of our earliest members in 1974, and will be sorely missed by all who knew him. We send our condolences to his family.

We were very pleased to hear that The Etches Collection has today been officially awarded Designated Status by Arts Council England - this further cements the reputation of the collection as being nationally and internationally significant.

You can read more in their press release: https://www.theetchescollection.org/news/2021/1/29/etches-collection-awarded-designated-status-by-arts-council-england

News from the 47th AGM

It was great to see so many members and supporters of GCG at our AGM last Monday, 30th November. Due to the fact that the UK was under a national lockdown, we held this virtually, and, far from being a hindrance, it actually allowed many more people from farther afield to attend the meeting, in addition to our "regulars". Thank you to everyone who took the time to attend and contribute. We will be discussing as a committee if we can incorporate the virtual format into our real world meetings as we move forward.

We started the meeting with two interesting and informative talks, from Derek Leung (Edinburgh University) and Liz Hide (Sedgwick Museum, University of Cambridge). If you were not able to catch the talks live, they were recorded and you can access the recordings (you will need to be logged in as a GCG member) from the AGM pages on the website at www.geocurator.org/agm2020

We were then able to move to our 47th AGM - again if you missed any of this you can catch up with all the papers from the meeting using the link above. There have only been a few minor changes to the committee structure. The most important change discussed was the conversion of GCG to a CIO (Charitable Incorporated Organisation), and we're pleased to say that the members' vote on this passed with a large majority. This is a much more modern charity structure than the one used back in 1986 when GCG first registered as a charity. For instance: 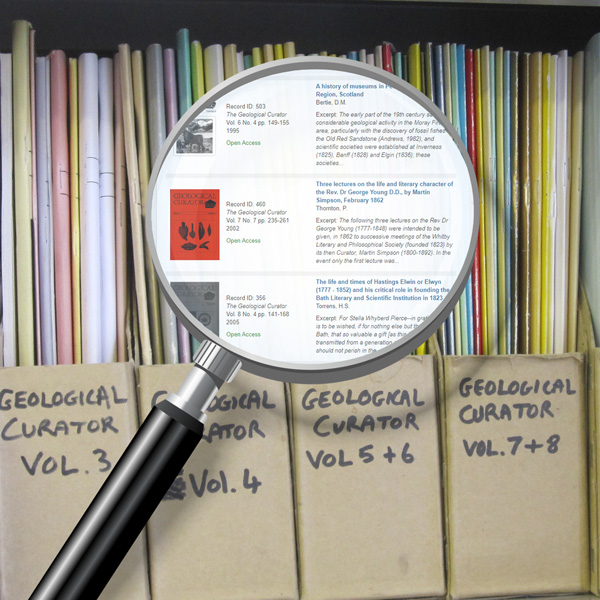 Our online search portal is an exciting new development allowing current subscribers to the journal to search the full text of our back issues. The vast majority of our back catalogue has now been indexed, with new issues being added on a regular basis.

You can search the complete text of all articles, or search by author, date, or any combination of these to ensure you can find the article you are looking for. Articles have been rescanned at higher resolutions, and have been reformatted into "offprint" style PDF's, for easy printing or reading on-screen. There are comprehensive instructions to help you get the best out of your queries.

The best way to get access to the Geological Curator Search Portal is to join GCG, which you can do anytime at https://www.geocurator.org/membership. If you are already a member, please log in to the site using the boxes to the bottom right of the screen, and return to this page to get started. 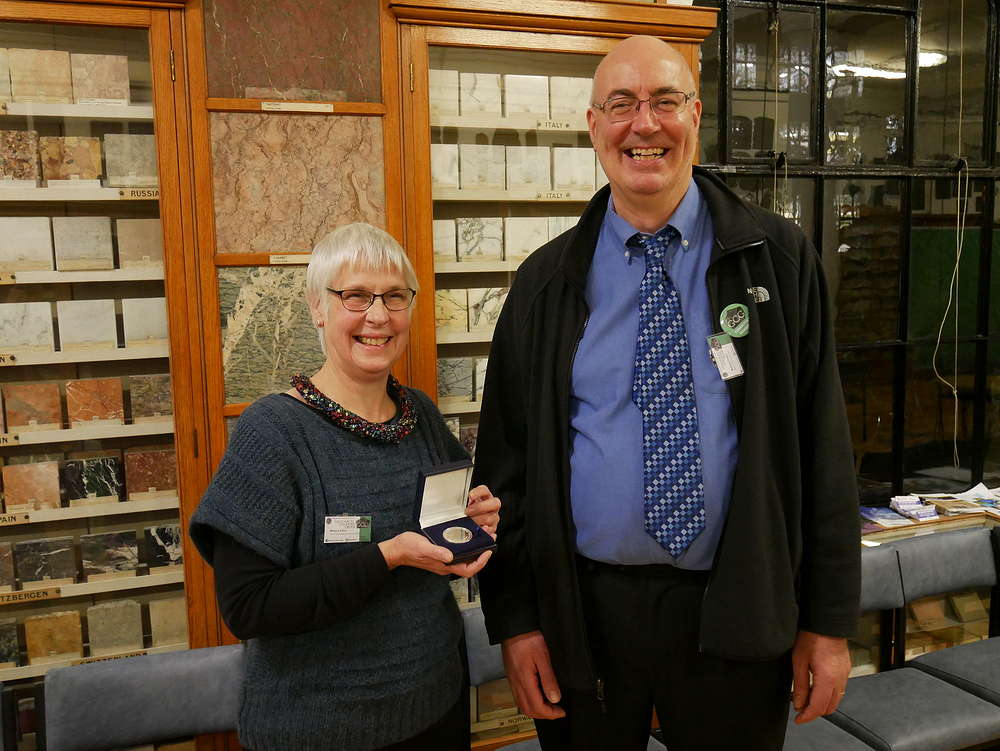 The Geological Curators Group is very sad to learn of the tragic death of our immediate past Chair, Matthew Parkes.

Matthew died suddenly last Friday, 23rd October, and his family, friends and colleagues are devastated. Matthew was Chair of GCG for three years, stepping down in December 2019. He is shown here in his last official duty as Chair, presenting the The A G Brighton Medal to Monica Price. His massive contribution as Editor of the Geological Curator from 2007-2019 also cannot be understated.

A full obituary will be included in a future Geological Curator journal.

Further details concerning funeral details and condolences can be found here. The National Museum of Ireland has published an appreciation of his work on their website, https://www.museum.ie/en-IE/News/Matthew-Alastair-Parkes